We want to announce a few more charity donations today.

We want to announce a few more charity donations today. I'll be making a donation to each of the following organizations nominated by fans.

Thornydale Elementary in Tucson was nominated by the principal as well as several students and parents. I've decided to donate $2,000 to them, $1000 for the playground they requested and another $1000 for school supplies. How could anyone fail to support those kids! They have a matching program for the playground equipment so think about making a donation by sending a check to Thornydale Elementary School, 7651 N. Oldfather Dr., Tucson, AZ 85741.

$1,000 will be donated to TyREDD, which was established to raise awareness about the dangers of driving while tired. Many people die every year as a result of drowsy driving, including many young people who are just beginning to learn how to be good drivers. TyREDD was nominated by Kerrie, Kyle, and many other people.

John and Kim nominated the Arthritis Foundation, a national organization dedicated to prevention and treatment of arthritis. Most people think of arthritis as a disease that affects older people but it also affects many young people even before they've been able to really get out and enjoy physical activity. $1,000 will be donated to this organization.

$1,000 will be donated to the Weekend Backpack Program of Feedmore in Richmond Virginia. Kids are given backpacks filled with six meals to get them through the weekend. The donation will provide a backpack for 100 kids who depend on the public school lunch program for their nutrition during the week. Thank you Patrick for nominating this organization.

The holidays are a time to give thanks and to support people in need in your community. Many blessings to all of you!

Thanks for sending in over 300 charity nominations!

The recipients I'm ready to announce today are: Virginia Tech Relay for Life, the largest collegiate Relay team in the world, and the largest fundraising effort at Virginia Tech, raising money to find a cure for cancer. This charity was nominated by a couple of different fans who are involved in the effort, Allyn and Amanda.

Creative Stages Youth Theater, in Peoria, AZ, nominated by two fans, Marshall and Tammy. This program provides opportunities for youth to get involved in positive creative activities and learn about acting and literature.

Youth House Atlanta operates after school programming for at risk or underprivileged youth in the Atlanta metropolitan area. This program was nominated by fan Tashua.

The Educational Fund to Stop Gun Violence, based in Washington DC and working across the country, raises awareness about ways to prevent gun violence, which takes a toll on far too many youth and families. This program was nominated by Christian.

Teen Lifeline, a phone resource based in Phoenix, provides counselors and peer support for kids who are dealing with depression and thoughts of suicide, providing support to kids when they are most in need. This program was nominated by Conner.

PEN in the Classroom sends professional writers for residencies in underserved classrooms to teach creative writing and foster interest in the written word. This is a program of PEN Center USA and was nominated by Jacqueline. They have been involved in programs across the United States, including Cleveland, Los Angeles and San Diego.

Thanks for nominating such inspiring and impressive programs! More programs will be announced in the next few weeks.

Our team isn't where we expected to be at this point in the season but we do not quit. A lot of teams in the NFL have had ups and downs this year and we are no different. This week we are working hard to get ready for our next contest against a very good Atlanta team, and we will be ready on Sunday.

As a result of my initiative in October to donate money to breast cancer organizations, I'll be donating $15,000 to the American Cancer Society, and $7500 to the African American Breast Cancer Alliance, and to Sistas of AZ for free mammogram screening.

Here's what you need to do:
Send an email to larryfitzgeraldfirstdownfund@gmail.com, with an explanation of why you think the organization you are nominating deserves the gift. Let me know a little bit about your personal interest in the organization's work. The email has to also contain the name and contact information for the organization - we need at least the address or website.

I can't believe I've been playing football for over 20 years

This week we head to Minnesota to face the Vikings in Minneapolis where I grew up and first played football as a child. It’s always special for me to head back to my hometown and compete against the Vikings. Heading into MN we are hungry for a win.

I can't believe I've been playing football for over 20 years. Ever since I first started playing football as a young child at King Park in South Minneapolis, I have had a passion for the game. The teamwork, the camaraderie and the intense physical competition make it an exciting game to play. The longer I play football, the more I understand the importance of using the right fundamentals and ensuring I'm wearing the proper protective equipment.

I want to say a big thank you to Riddell for very generously teaming up with me to donate protective equipment to the Minneapolis Park and Recreation Board's football programs, the same youth football program where I got my start over twenty years ago.  I was looking into making a donation of protective equipment to the program where I got my start and Riddell generously joined me in making the donation.

As a result of the donation Riddell and I have teamed up to make, 1,000 Minneapolis youth ages 10-14 will be outfitted with new, state-of-the-art head protection from the industry leader, Riddell. These kids will have access to the same technology used at football's elite level.

Riddell is a premier designer and developer of protective sports equipment and a recognized leader in helmet technology and innovation. For more information, visit http://www.riddell.com, like the Riddell Facebook page, or follow Riddell on Twitter @RiddellSports.

The Minneapolis Park Board operates 49 year-round, neighborhood-based Rec Centers with full- and part-time staff committed to providing quality recreation opportunities and programs. Minneapolis has over 180 parks covering over 6744 acres of land and lakes, with facilities that include basketball courts, football, baseball and softball fields, tennis courts, golf courses and 50 miles of paved trails 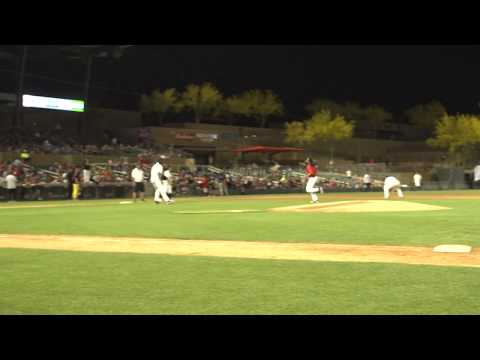 ABOUT
LARRY
Larry Fitzgerald Jr is an American football wide receiver for the Arizona Cardinals (NFL) and philanthropist doing charity work around the world with Oxfam and his own foundation the Larry Fitzgerald First Down Fund.
CONTACT
LARRY
Please select the most appropriate link.
You can contact me via the following links
CONTACT
FOLLOW
LARRY
FEATURED
SPONSORS: